What I'm Reading This Month

More book recommendations for all those nonexistent readers out there. Similar to my picks the last time I posted about this, there are again three tomes on my table catering to different desires over the course of the day. I've got one that's hefty, one that's thin, and one that's mostly pictures. 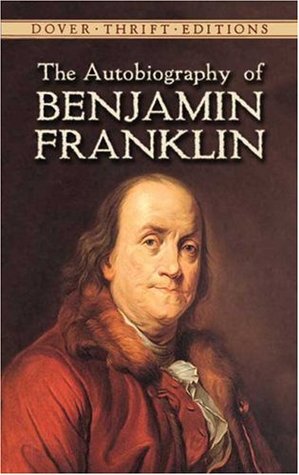 1. The Autobiography of Benjamin Franklin. This is the one that provides inspiration. (For those in the remedial class, Benjamin Franklin was one of the Founding Fathers of the United States of America, responsible for the country's first paper money, fire department, and library system, as well as oodles of other things, and he is perhaps best associated with the discovery of electricity for a certain story involving a kite and a key during a thunderstorm.) There was something of a craze over this when it was released several years ago. I bought a copy, along with everyone else on the bandwagon, but then it langoured unread on my shelf for years, for some reason. The archaic language conventions and idosyncracies of spelling can be off-putting in the beginning, but they aren't as difficult to get used to as one might think. The book is a treasure-trove of insight as well as a guide to becoming the best version of oneself one can be (Franklin was very methodical in this personal pursuit). Not long ago, I came across a YouTuber analyzing Franklin's daily routine in a take-what-you-need-and-leave-the-rest manner, advising self-improvement junkies not to let 'some dude who lived 300 years ago' dictate how you arrange your day, to which on a level of insight rarely glimpsed in YouTube comments, someone pointed out that he was 'not some dude who lived 300 years ago, he was one of the greatest human beings who ever lived'.
He also said something along the lines of 'When the people find that they can vote themselves money, that will herald the end of the republic'. Which brings us to the next gem:

2. Beyond Democracy by Frank Karsten and Karel Beckman. This is the thin volume with pithy bits that can be read in bite-sized pieces and digested for the rest of the day. In preface, I say that with a considerable degree of self-restraint, I have managed for the most part to avoid discussing politics in a public capacity, even though it goes without saying that TPIEF would not necessarily endorse my statements even if they were read by another human being; but I believe that this far into 2017, with only a few weeks to go, I can permit myself the minor indulgence of decrying the virtues of this pithy little tome. I read it several years ago, and already agreed with almost everything in it. (It's always comforting reading things that reinforce your biases, rather than challenge them.) It's a short and direct deconstruction of the tolerably widespread misconception that democracy is the ideal form of government. If nothing else I can quote tracts of it to my students when they're advanced enough to play Create Your Own Country, when it comes around to the political system and they invariably say, 'Of course democracy!'

3. Faeries by Brian Froud and Alan Lee. I was introduced to this incredible book as a small child, and it had a tremendous impact on my imagination and drawing style for the rest of my life. Since then, this book has inspired a host of sequels and spin-offs, but this was the original classic. On re-reading it now, the myths it describes seem to veer more to the banal side of magical, but the artwork is still awe-inspiring. Brian Froud is still a talent unlike any other. His oil paintings are the sort of thing we only ever see in photo-manipulation works these days. He did it the old-fashioned way, and better than I've ever seen it done since.
(I recommend this particular gallery at worldoffroud.com, his website in collaboration with his wife.)