Dokudami (Houttuynia cordata) is the local name for this pernicious garden invader. It turns out to be one of the most dreaded pests ever to take vegetable form in this land. 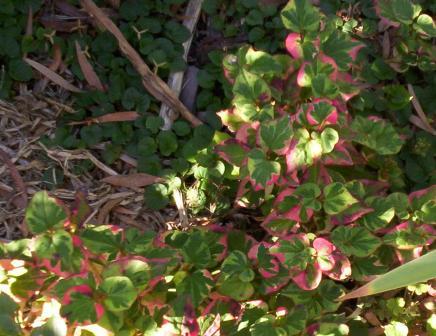 I wasn't even aware of its existence until my wife mentioned the name when we were pulling up foul-smelling handfuls of it from around the family grave. It seemed like it shouldn't grow back when torn out by the roots--but it did.

I started noticing it in our own garden not long afterward. A quick bit of research indicated that it reproduces by 'spores', and that once the 'spores' get into your turf the plants are virtually impossible to eradicate.

It's kind of like mint in that way, only not as pleasant-smelling.

(Actually, they used to warn us that mint would take over the vegetable patch after a fashion, but it took us years to get more growing than we knew what to do with. We've reached that point now, of course, but most of the mint is growing between two of our rose bushes, in between anise and dill, which keeps it in check somewhat. We only chop of the big fat leaves from the tops of the really tall plants--the ones we can access without getting an armful of thorns in the bargain.)

At any rate, one of the vernacular names for dokudami happens to be fish mint. It's also called the chamelon plant.

I used to joke with my wife, when doing all we could do to keep our vegetables alive while weeds did better in spite of our best efforts to destroy them, that all our problems would be solved if we could only learn to eat weeds.

It turns out there is something called dokudami-cha, though I can't imagine who would want to drink it. I suppose it must be popular among people for whom eating natto just wasn't painful enough.

No, gentle-but-probably-nonexistent reader, it gets better. The stuff is apparently a staple in Vietnamese cuisine. You can eat it in spring rolls and salads, apparently.

We should probably try some of them, in all fairness, since the fish mint is likely to be with us for the rest of our natural lives. It's just that there are limits to the amount of personal experimentation I'm willing to undergo.